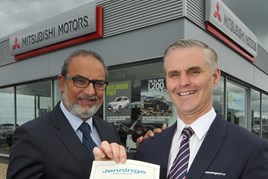 Jennings Group’s Robert Flintoft has been recognised for his long service after spending a quarter of a century with the North East retailer.

Jennings managing director Nas Khan presented the 50-year-old sales executive and Motability specialist with an official loyalty certificate and vouchers to mark his landmark anniversary with the business.

Khan said: “It was a pleasure presenting Robert with his loyalty vouchers.  He is a dedicated and committed employee who will continue to succeed in the future.

“I would like to take this opportunity to congratulate him for his continuous hard work and loyalty over the past 25 years.”

A member of staff at Jennings Mitsubishi, Cargo Fleet Lane, Middlesbrough, Flintoft started work at Jennings in 1991, when he was appointed as a sales executive at the group’s Ford dealership based on Yarm Road, Stockton.

Last year, when the group’s Mitsubishi dealership on Cargo Fleet Lane in Middlesbrough became an accredited Motability dealer, Flintoft made the move from Stockton to Middlesbrough.

His current role involves working as a sales executive and Motability specialist.

AM Poll
Has technology taken jobs out of your dealership? Please leave a comment
Vote
View all
205