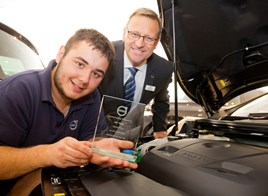 Jake Taylor received the prestigious accolade after impressing his tutors during his time studying at the Swedish car manufacturer’s Daventry training centre.

Having completed a mechanics course at West Nottinghamshire College, Jake undertook work experience with the Sir Frank Whittle Road dealership and impressed so much he was offered an apprenticeship.

Taylor is following in the footsteps of his father, Darren, who is the master technician at Bristol Street Motors Volvo Derby.

Taylor said: “I’m exceptionally proud to be named as apprentice of the Year by Volvo.

“I think I had an advantage compared to most other people on the programme because I’ve been learning since I was old enough to pass my dad the spanner whilst he tinkered away in our garage.”

Bob Bean, general manager at Bristol Street Motors Volvo Derby, said: “Everyone at the dealership is over the moon for Jake and he should be very proud of his achievement.

“He has been one of the most committed and enthusiastic apprentices we’ve ever had. If he takes after his dad he will be a first class master technician very shortly.”