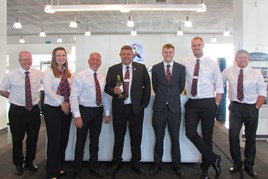 And the 46-year-old, who joined the dealership as a valeter in 1986 and has since progressed within the company, credits a football injury with his progression through the business.

Having advanced from the roles of business manager, in 2005, and new car manager, in 2006, Christopher became general sales manager at Robins and Day Preston in 2008.

Reflecting on his 30 years’ of service, Christopher said: “Robins and Day Preston is a fantastic place to work.

“In my early career as a valeter I broke my ankle playing football, which meant I could not stand on my feet all day.

“It could have been detrimental to my role, but the dealership was excellent and adapted my role within the business, making me an admin assistant.

“This change subsequently allowed me to progress through the ranks and get to where I am today.”

Christopher added: “I couldn’t be more proud of my colleagues and their hard work, which has helped the dealership become such an important part of the local community.”

Robins and Day Preston general manager, Phil Walker, said: "Craig is a much valued and hugely respected member of the team.

“His commitment and enthusiasm has played a key role in the success of our dealership.”