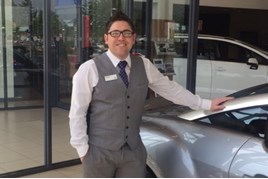 Swansway Peugeot Chester has found its first general manager with promotion of sales manager with “an eye for detail”.

The Peugeot centre has been looked after by Swansway Chester operations director Andrew Wakelin since it opened, with a number of challenges ahead, back in 2010.

Now Jay Dougan has been promoted to general manager at the Sealand Road dealership, freeing Wakelin up to focus on his true role of operations director across all the Swansway brands in Chester; Citroën, DS, FIAT, Alfa Romeo, Jeep, Abarth and Peugeot.

Wakelin said: “When the site opened in 2010 it was brand new, we had no database, no customers and a big hill to climb.

“Now the centre is busy, indeed it’s thriving with the great team that Jay has pulled together around him.

Dougan joined Swansway Peugeot Chester two years ago, as sales manager, and Waklin said that he has been “Instrumental in creating a really positive environment”, adding: “He is the embodiment of the Swansway values of caring, honest and proud.

“He has a great eye for detail, displaying cars to their very best advantage and he has great rapport with customers and colleagues alike.

“I’m thrilled that he’s been promoted into this new role, he is thoroughly deserving.”