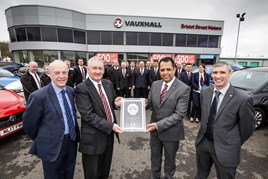 Watchman played guitar in the 1960’s R&B band, Love Affair, when their cover of the Robert Knight hit Everlasting Love topped the UK music charts in 1967.

Now he is planning to pick up his guitar once again after ending a career spanning almost 40 years at the Hylton Riverside dealership and Jass Singh, general manager, presented a plaque to commemorate his contribution to the business.

“Even though our CEO Robert Forrester has more than 120 dealerships to deal with, he took time out of his schedule to come see me and thank me for my time with the company.

“There aren’t many people at the top of big companies who would do that and it typifies the personal approach that makes Bristol Street Motors so successful and such a great place to work.

“Now that I’m retired, I’ll spend more of my evenings playing guitar with my friends in local bands.

“I’m also looking forward to spending a lot more time at my second home in Spain and helping my children and grandchildren out with their young ones.”

John first joined the dealership as a sales executive before his hard work and dedication to the role saw him promoted to undertake managerial positions.

Singh said: “John’s presence around the dealership will be greatly missed.

“I wish John all the best and hope he enjoys having more free time to spend with his wife, grandchildren, great grandchildren and his guitars.

“I hope that when he’s not enjoying the sun over in Spain, he will occasionally pop into the dealership to have a quick catch up.”

Picador plc stalwart retires after 54 years at the same dealership

Picador plc stalwart retires after 54 years at the same dealership