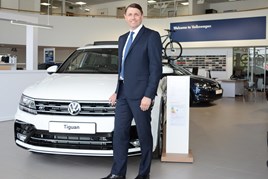 Athlete turned Alan Day Volkswagen managing director Paul Tanner is celebrating 30 years with the group after injury turned his focus to a career in automotive.

The former athlete, who played football for Watford and represented Britain in the hurdles, had to cut short his athletics career through injury, but athletics' loss was the London-based dealer group's gain.

Tanner (pictured) started his career at Alan Day VW as a parts driver aged just 19 and was placed on a two year apprenticeship in the service department before being promoted to the role of supervisor in the parts department.

His various roles within the group have included service manager, aftersales manager and general manager.

Tanner's rise through the business reached new heights when he replaced Alan Day following his retirement in 2006, a move which saw him become one of the youngest managing directors in the country.

“When I was an athlete, I trained every day and always had a strong work ethic. When I joined the company I simply transferred those values and threw myself into everything," said Tanner.

"I’m not sure what health and safety would make of it these days but I could often be found standing on top of cars cutting holes so a sun roof could be put in."

Reflecting on his three decades in the automotive industry, Tanner said that he learned a lot from his predecessor. He said: “I learnt a lot from Alan Day, who was a stickler for detail and demanded everything should be perfect. The cars had to be spotless and the service to the customer had to be perfect through all departments."

He added: “I suppose the thing I’m most proud of is the customer satisfaction part and we were recently voted first and second across the whole VW network in the UK for customer care.

“I’m very proud of my staff and how hard they work and many of them were here when I started.

"It means we look after our customers properly from the moment they walk into the dealership to book a service or report a fault to the part when they drie away in their brand-new vehicle.

“Our values of honesty, loyalty, empathy trust and humility are very important to us and ingrained in our business.”

Tanner celebrated his 30-year anniversary with staff at the group's Hampstead facility.

Tanner Automotive, trading as Alan Day Group, recorded turnover of £87.9 million and profit before tax of £396,871 in its last published accounts, for the period to December 31, 2015.