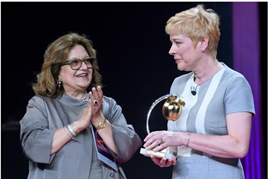 Citroën’s global chief executive Linda Jackson has been presented with the ‘Mela d'Oro’ award by the Marisa Bellisario Foundation in Rome.

The award, open to professional women with a career in management, society or the sciences, was presented to Jackson last week in Rome.

Linda Jackson, an MBA graduate of the University of Warwick, joined Citroën UK in 2005 as chief financial officer. Five years later she was appointed managing director of Citroën UK and Ireland.

Linda has been global chief executive of the Citroën brand since June 1 2014.

Jackson said: "This Mela d'Oro testifies to the growing importance that women are taking in roles of responsibility, which very recently were characteristic of the masculine world, in particular in the automotive industry. I share the same desire as Marisa Bellisario, who encouraged young women to be confident in their abilities and not be afraid to aim high."