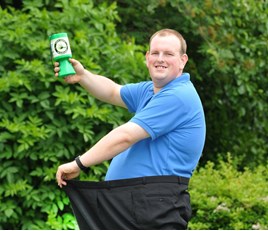 Pound-shedding parts advisor Ben Grigg lost 14 stones in nine months in a bid to pile funds into the charity fund-raising kitty of his employers, Jennings Group.

The 27-year-old parts advisor at Jennings Ford in Gateshead, started dieting in September last year after his weight reached 33 stone and his BMI (body mass index) was 62.

Grigg’s weight-saving regime now involves a healthy balanced diet, as well as visiting his local gym for a full body cardio and weights work-out four times a week, a process which has resulted in him losing a staggering 13 stone and 8 1/2lbs.

Over a three-month period he was also spurred on by a Jennings Group slimming competition, contested by seven other participants across the group.

At the end of the competition, the grand total raised by staff was £892 with a combined weight loss in excess of 15 stone.

Now Grigg is bidding to take part in next year’s Blaydon Races, a 5.6 mile run from Newcastle upon Tyne to Blaydon.

Grigg, who has raised funds for Jennings’ chosen charity, the Great North Air Ambulance Service, with his weight-shedding efforts, said: “It’s a complete change of lifestyle and it was very hard adapting at first, you have to be 100 percent focused, motivated and determined 24/7.”

The weight loss battle isn’t over for Grigg, who currently weighs 19 stone 8 ½ lbs and a much improved BMI of 37.2 – and is determined to reach his target weight of 16 stone by the end of this year.

Nas Khan OBE, Jennings Motor Group’s managing director, said: “I would like to congratulate every member of staff who took part in the fundraising competition, all participants did extremely well and boosted funds for our nominated charity.

“Ben should be immensely proud of his achievement, which has also raised money for a very worthy cause.”