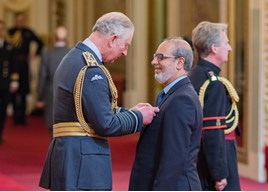 Philanthropic Jennings Group managing director Nas Khan has been made an OBE by HRH The Prince of Wales during a visit to Buckingham Palace.

Pakistan-born Khan, owner and managing director of the Middlesbrough-based dealer group, was appointed an Officer of the Order of the British Empire for his charity work and contribution to the economy.

He said: “It’s a tremendous honour to receive such an award – I am very humbled and extremely honoured.

“I was also thrilled that members of my family were able to share such a momentous occasion with me, given the support they have given over the years.”

In 2010, Khan embarked on an epic charity campaign to help save and rebuild the lives of people in Pakistan, following devastating floods.  An appeal was set up through his own registered charity, The Emaan Foundation.

On completion of the village, which has officially been named ‘The Emaan Village’ after the charity, Nas launched a second appeal with the aim to build a health centre for the village community and surrounding areas.  To date, funds are in excess of £20,000.

As managing director of Jennings Motor Group, Nas is responsible for 524 members of staff across the company’s Ford, Kia, Mazda, Seat and Mitsubishi branches located from Tyneside to Teesside, in addition to recently adding Harley-Davidson dealerships in Leeds and Gateshead, as well as a Subway store in Stockton, Teesside, to the business portfolio.

In addition to being awarded an OBE, Nas has also been the recipient of Ford Motor Company’s ‘Salute to Dealers’ global award, as well as being awarded Teesside Business Executive of the Year at the North East Business Awards.