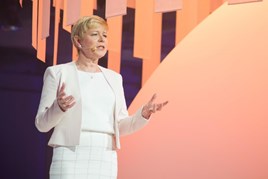 Citroën chief executive Linda Jackson has been named as “the most influential Brit in the global car industry” in the 2017 Auto Express ‘Brit List’.

Appointed as global chief executive in 2014, Jackson has overseen Citroën's operations as the brand recorded its highest sales volume for five years in 2016 across Europe, and in the same year selling 1.2 million Citroën vehicles worldwide.

Sales have been driven in particular, by New C3 – the brand’s best-seller – which has already sold over 150,000 units since launch.

Jackson said: “I am truly honoured to receive this award. Citroën is an iconic French brand and yet here I am, a Coventry-born Brit, running this truly fabulous French company.

“For me, it is an absolute privilege to lead a brand that has always shown audacity and creativity throughout its history since it was founded in 1919.

“Over the past couple of years we have transformed the Citroën brand. We have initiated a deep-seated renewal, with products that are unique through their design, comfort and technologies – including the C4 Cactus, the New C3 and, soon, the New C3 Aircross compact SUV.

“I hope that my Auto Express award inspires even more women to pursue a career in the automotive industry and to get to the very top. There is a wealth of talent in the sector and it is truly a very exciting industry to be a part of.”

Auto Express editor-in-chief, Steve Fowler, said; “Linda Jackson has led this iconic brand on a journey of rediscovery – but not once tinged with romance for what used to be, one with the excitement of modern technology, cutting edge design and brand values that buyers are, once again, falling in love with.

“Linda is leading a brand that has helped in the turnaround of one of the biggest car groups – and one that’s growing fast. We’ve seen a host of exciting new products from Citroën already and know there’s much more to come.”