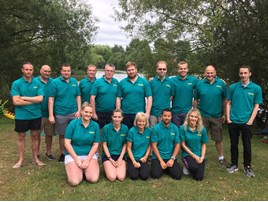 Trident Honda's support of Woking & Sam Beare Hospices in an annual dragon boat race is expected to raise more than £18,000.

Trident Honda’s managing director Richard Roberts said: “Every year we see new and wacky designs and this year was no different. Thanks to our team the, Trident Otters, for taking part, we may not have won but with just 17 seconds between the first and the last teams it was a hard fought battle!

“There was a fantastic turnout from the local community on the day and the weather couldn’t have been better for it. We look forward to continuing our partnership with Woking & Sam Beare Hospices and helping to raise much needed funds.”

The Goldsworth Park Lake event is in memory of Kris Cook, who enjoyed the lake, watersports and was a keen supporter of Woking & Sam Beare Hospices.

Woking and Sam Beare Hospice’s director of fundraising Phil Wormley said:  “As a charity that relies heavily on voluntary income, raising £4,500 from stalls and activities on the day alone will make a huge difference.

“On behalf of all of us at the hospice I extend a huge thank you to our event sponsor, Trident Honda, to their team the Trident Otters and to all the teams who took part in the dragon boat race.”