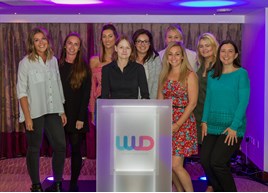 WWD exists to support women in the automotive industry, where female team members are often greatly outnumbered by men.

Early this year, members of the Cox Automotive team decided to take on the challenge of climbing Mount Kilimanjaro, in order to prove female strength and resilience within the industry and beyond.

There were 33 applicants to be part of the team, and each one took part in a 'strengths finder' exercise, in which they gained insights into their abilities, strengths and potential.

On July 5, Cox Automotive employees of all genders came together for the fifth WWD event and Alison Fisher, group HR director at Cox Automotive revealed the 10 selected women who will take on the challenge in February.

Fisher said: “I’m immensely proud of what we have achieved with Women with Drive so far – and we’re only going to go from strength to strength. As someone who’s passionate about helping women dream big and reach their goals, it’s amazing to see so much engagement and positivity from all genders.

“I’m excited to see what this team of 10 will achieve over the next few months, and I look forward to congratulating them as they return victorious from climbing Mount Kilimanjaro.”

Aneliese Platts, who has been chosen for the climb, said: “I’m lost for words to be included in such an amazing experience – I was shocked when Alison called my name, but now I’m excited to get started with training and fundraising. Bring on the challenge.”

The past year and a half has seen five WWD events, featuring a host of inspiring speakers, including Nathalie McGloin, the UK’s first spinal cord-injured female Porsche racing car driver; Jo Salter, Britain’s first female Tornado fighter pilot; and Natalia Cohen, who was part of the six-woman ‘Coxless Crew’, which successfully rowed across the Pacific Ocean in 2015-16.

Cox Automotive will be exhibiting at Automotive Management Live. To find out more visit the event page.