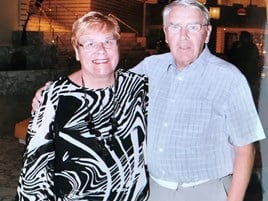 Tribute has been paid to Hepworth Motor Group founder Frank Brighton after he passed away suddenly at the age of 77.

Born in Wakefield in 1940, Brighton had spent his entire working life in the motor trade.

Starting as a technician, he then joined Wakefield Garages – then part of the Thomas Tilling Group – where he rose to the position of sales manager.

“During this time he also taught at Leeds Technical College, which enabled him to start his own business”, recalled his son, Hepworth Motor Group managing director Stephen Brighton.

Brighton’s Car Centre opened in Featherstone in 1970 and Frank sold used cars from the site until 1981.

In 1980 he had purchased a Honda dealership in Kirkburton, Huddersfield, and begun a career as a franchised retailer in his own right.

The original Honda franchise is still in operation today – albeit now from a facility on Leeds Road, Huddersfield – and is one of the oldest in the Honda dealer network.

Over the years Hepworth Motor Group has also worked with Daihatsu, Mitsubishi and Ssangyong.

Stephen Brighton told AM that his father’s legacy will the number of people in the motor trade he gave a start in their careers to and the Hepworth Motors strapline “the small firm that tries harder” which is still the business’ ethos 47 years later.

He said: “My father was extremely keen on helping people develop from young technicians at Leeds Technical College to apprentices and all his employees at work.

“He believed where possible to promote from within and give people a chance. Our current senior management team have come up through the ranks. Many staff have worked for the business for over 20 years, including one technician, Martin Holbrook, who has been with the business since 1969.

“He was a family man who included his employees in his family.”

Frank Brighton is survived by his four children and his funeral will be held at Pontefract Crematorium on Thursday, December 21, at 1.40pm.

The three Hepworth Motor Group businesses will be closed as a mark of respect and to enable staff, past and present to attend if they wish. Donations can sent to www.dementia.uk.org.