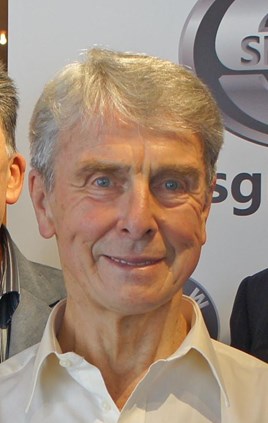 Snows Motor Group has paid tribute to its founder, Geoff Snow, following his death in hospital last week at the age of 85.

Having launched Snows as an office supplies business in Southampton in 1962, he moved into motor retail 38 years ago with a Toyota franchise in the city, a business destined to become an AM100 group with more than 750 people and the Snows brand displayed on 35 franchises across southern England.

He leaves behind his wife, Joyce, son Stephen, who has been group chairman since Geoff’s retirement in 2007, and daughters Jacqueline and Jenny, as well as nine grandchildren and a great grandson.

Stephen Snow said: “We’ve seen generations of families buy from Snows because of what dad did – he knew the importance of making the purchasing decision process as comfortable as possible for the buyer. That philosophy is at the heart of what we do at Snows – it is enshrined in our training academy, on the forecourts and in the service bays. Car manufacturers soon realised that Snows was a family-run brand trusted and respected by customers of all ages and requirements.

“Whilst as a family we grieve, my father’s legacy very much lives on in the company name and the pioneering culture he instigated and oversaw with his trademark driving spirit.”

Mark Trapani, group managing director, said: “Geoff was always a special man in so many ways. He recognised talent and gave people opportunities to blossom.  I joined Geoff and soon became a director with a clear brief. He was always fair and could be a very generous leader provided you managed the pennies.

“He was a great inspirer who allowed you to get on with anything you were prepared to commit to.”

Shawn Gates, group financial director, added: “It has been a rewarding experience working for Geoff and many families owe him a debt of gratitude for what has been achieved with the group over 55 years.”

Funeral details have not yet been finalised.