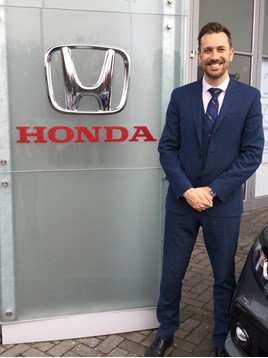 Hendy has appointed Richard Stevenson as sales manager to its Honda Portsmouth site.

The appointment follows a string of new recruits announced by Hendy Group over recent weeks, including Andy Meaden as Kia and Suzuki franchise manager and a new management team at its Chichester Ford site.

Commercial director Mark Busby said Stevenson’s (pictured) extensive experience within the industry puts him in an unrivalled position to look after sales for Honda in Portsmouth.

Stevenson has worked within the motor industry since the age of 16, starting as an apprentice tyre fitter.

After four years of progression, and becoming a fully trained technician, he joined Hendy Ford Winchester as a sales executive.

“From there I moved to work with other brands, rising to the position of business manager,” said Stevenson

“Honda is a very special brand, and one that I know will be hugely popular among car buyers here.

"I am joining the team at a very exciting time, and am looking forward to some very successful months and years ahead for our Portsmouth operations.”