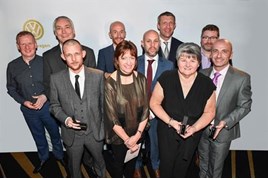 Awarded by Volkswagen AG, the gold pin was first presented in 1967, but only 1,200 people have received one.

The ceremony was held in London and hosted by UK director Alison Jones, head of operations Rod McLeod and head of service and parts Kevin Rendell.

Among the recipients was Malcolm Ingram, who joined Volkswagen as an apprentice mechanic in 1985 and eventually became managing director of Ingram Motoring Group in 2010.

David Lloyd has provided excellent customer service and for being the top salesperson at Hayselden Barnsley Volkswagen for 15 years.

Tim Lavender, of JCT600 Sheffield, was awarded for working on over 50,000 Volkswagen vehicles without a single return to the workshop.

Andy Marshall from Warrington Volkswagen was recognised for the time he spends with each customer and for taking an active role in bringing new team members on board.

In the Sutton Coldfield Volkswagen business for 29 years, John Reddin received a gold pin for selling more than 6,000 cars and for embracing the brand’s award-winning Blended Retail technology.

Noreen Coid, at Walkingshaw Volkswagen, was recognised for building trust and rapport with customers, and Nick Wells for helping Alan Day Hampstead to feature in both the top 20 Volkswagen Retailers and the top three for customer satisfaction for the past three years.

The 10th gold pin was presented to Kevin Rendell, who has been with Volkswagen Group for 25 years and started his career as an apprentice at Caffyns.

He is now head of service and parts at Volkswagen UK’s head office in Milton Keynes.