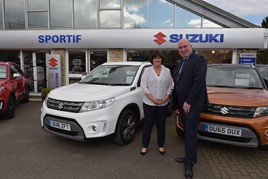 Sportif Suzuki hopes to have struck up a match made in heaven with its new leadership team, following a management buyout completed by husband and wife duo Nick and Annie Allen.

Oxfordshire-based Sportif, which claims to be one of the first Suzuki dealerships to open in the country, has appointed Nick Allen, who worked at the motor franchise site for 17 years after joining as a dealer principal, into the Long Hanborough business with his wife in a MBO deal.

The duo have taken over from previous directors John Miskin and John Boardman, who ran the site since 2000.

John Miskin said: “Suzuki have been extremely supportive in allowing Nick to take over the franchise as it is a very sort after Marque and ranked highly amongst others. Having known Nick for over 25 years I know he and Annie will make a great success out of the business.”

Nick Allen said: “Annie and I were offered a lifetime ambition when the directors agreed to us purchasing Sportif Suzuki. Having run the business for almost two decades it didn’t take me long to convince Annie.

“The site has been a Suzuki franchise since 1979. It was one of the first to open and today there are 152 dealerships in the UK. This is an incredibly exciting time for us and the dealership as it has clear plans for growth.”

The on-site petrol station will continue under the Allens’ ownership and staff will remain unchanged.

“The saying ‘don’t fix something that isn’t broken’ is exactly my intention here,” said Allen

“There will be no additional tier of management and no senior changes will be made. The only change is Annie coming on board, everything else will continue as it was.

"We are a successful team and will continue to be so.”