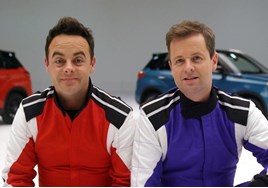 In a move that brought to an end a deal which was initially struck for a period of two years, at the end of 2015, and later extended the Japanese car manufacturer said that “no further material featuring the duo” would be aired.

It will come as a blow for the celebrity pairing and the brand, which had generated publicity via regular car giveaways on the Saturday Night Takeaway show, sponsorship slots in prime-time Saturday night advertising breaks and viral YouTube videos.

Speaking to AM at the Geneva Motor Show earlier this month, Suzuki GB managing director, Dale Wyatt had told AM: “The Ant and Dec work has been extremely successful for us. While they are incredibly famous they only work with on car brand and we’ve been really happy with the response to Saturday Night Takeaway and the other promotional campaigns we have worked with them on.”

Ant and Dec’s on-screen partnership was thrown into disarray when McPartlin was arrested on suspicion of drink driving following a collision involving a Mini and two other vehicles.

McPartlin booked himself into rehab last summer for drink and prescription drug addictions and was re-admitted after last Sunday’s (March 18) incident.

Saturday Night Takeaway was not screened on Saturday as a result of the situation. However, ITV confirmed that the remaining two episodes, including the series finale live from Orlando, Florida, will go ahead with Dec presenting alone.

Suzuki said in its statement that it would “continue to sponsor the last two episodes of this series of Saturday Night Takeaway” with its “current idents”.

It added: “Suzuki very much supports Dec and ITV's decision to broadcast the shows and as headline sponsors we also want to support the competition winners who have won places on the Plane to Florida for the series finale.”