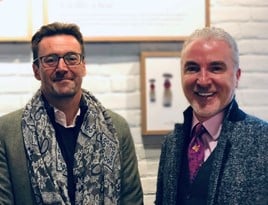 Fleetondemand has appointed Andrew Cope as executive chairman, following a £5m investment in the tech firm by the Business Growth Fund (BGF).

Cope’s appointment follows the recent deal with British Growth Fund (BGF), which has acquired a minority stake in the firm, through a £5 million investment.

The appointment and investment sees the two come together at a time when Fleetondemand is experiencing growth in the UK and internationally, in particular the rollout of its Mobility-as-a-Service platform, Mobilleo.

Cope said: “Sometimes every once in a while, opportunity’s come along that you have to get involved in.  For me, being asked to invest in and be part of the FOD story following the recent BGF investment was just one of those moments.

“Having known Justin for many years and watched with real interest and admiration the development of the company, the chance to become chairman at this ground-breaking juncture in the history of the company, especially with the recent launch of the Mobilleo platform was a real honour.”

Cope has been described as “the fleet industry’s most renowned entrepreneurs” and who, as the driving force behind vehicle leasing company Zenith, steered the company through five successful private equity buyouts between 2003 and 2014.

In 2015, he was instrumental in the sale of FMG to Redde just four months after snapping up the firm in a backed management buyout. In 2015, he invested alongside Endless and acquired Essential Fleet services, merging it with Go Plant in 2017.

Prior to founding Fleetondemand, chief executive Justin Whitston created Nexus Vehicle Rental in 2000. He was responsible for inventing and delivering the leading proprietary SAAS technology solution IRIS to market, prior to exiting to Living Bridge, via a multi-million pound BIMBO.

Whitston said: “Following our recent investment, the creation of a world-class executive board was paramount to our strategy. Andrew has an unrivalled track record in his field and we are incredibly excited about working with him to drive the future success of our business.

“With the support BGF and Andrew, we will be able to ramp up engineering and product development and rapidly accelerate our sales strategy in the UK and pan European launch in 2019.

"It’s a hugely exciting time for the business and we all look forward to working together to achieve the company’s growth potential over the next three years.”