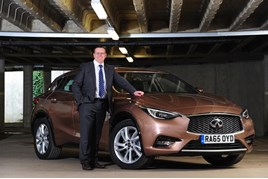 Infiniti is on the hunt for a new UK boss after its regional director of Northern Europe Barry Beeston was appointed managing director of Circle Leasing.

Beeston’s move to Circle, which claims to be the UK’s leading supplier of courtesy and accident replacement cars, comes 19 months after he joined the premium brand from a position as the UK’s corporate sales director at parent brand Nissan.

He becomes the third NSC boss to announce a departure from their post in recent weeks, with current Volkswagen Group UK managing director, Paul Willis, and Hyundai Motor UK president and chief executive, Tony Whitehorn, both leaving their current posts at the end of the year.

A spokesman for Infiniti said this week that no direct replacement had been officially announced for Beeston as yet, but added that the brand’s fleet manager Jonathan Reynolds will be “heading up Infiniti UK until such time a further announcement is ready to be made”.

He has had a career in the car industry which started as a graduate trainee at Jaguar Cars before moving to Nissan in the 1990s.

“I am very pleased to be joining the team at Circle Leasing,” said Beeston in a statement issued by Circle Leasing this week. “I have admired the organisation for many years, always being impressed by their professionalism and customer-centric approach to business.

“It’s a privilege to have the opportunity to work with such an industry-leading and award-winning organisation.”

Minogue said: “With Barry, we have secured a high-calibre executive who shares a great passion for Circle Leasing and its future prospects.

“This change enables me to move away from day-to-day operations and focus on developing new strategies for the business.”

Infiniti to introduce EV models from 2021

Infiniti to introduce EV models from 2021