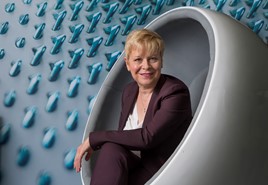 Citroën’s global chief executive Linda Jackson was awarded an Honorary Fellowship by the Institute of the Motor Industry (IMI) at the body's annual dinner in London.

An Honorary Fellowship is the highest lifetime award the Institute can bestow on an individual within the automotive industry.

The Institute of the Motor Industry (IMI) has presented Jackson (pictured) with a prestigious Honorary Fellowship, the highest lifetime award the Institute can bestow.

“It is such an honour to receive this Honorary Fellowship and to be recognised by the IMI in this way,” said Jackson.

Last year, Jackson was honoured with the Sue Brownson Award in recognition of outstanding leadership in the automotive sector. Honorary Fellowships are decided upon by the IMI board and confirm Linda’s contribution to the automotive industry.

Jackson joined Citroën UK in 2005 as finance director, and became managing director of Citroën UK and Ireland five years later, before being appointed chief executive of the Citroën brand globally on June 1, 2014.

Since then, Citroën has embarked on an all-encompassing brand transformation, launching six new models in the last 24 months and taking inspiration from customers and their lifestyles, illustrated by the ‘Inspired by You’ brand signature.

Commenting on her recognition from the IMI, Jackson said: “It’s a testament to all the hard work and creativity of everyone at Citroën.

“I am proud to be honoured by such an esteemed organisation, which is dedicated to improving UK automotive professional standards.

"It’s an exciting time for the motor industry, as we look toward to the future of mobility and electrification, and I hope my success can inspire young women, and young men alike, to pursue a career in this vital and ever-changing sector of the economy.”