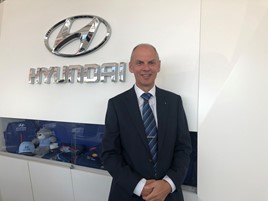 Wilson (pictured) has worked in the sector for 40 years with motor retailers including Volkswagen, Rover, Isuzu and Subaru.

In his new role with the Vertu Motors-owned retail operation he will be responsible for developing colleagues at the Avon Meads dealership and focusing on best business practices.

“Bristol Street Motors has forged an enviable reputation for being a go-ahead, ambitious company, which provides first-class customer service and after care. And it was these qualities that attracted me to the business,” said Wilson.

Wilson started his career in a parts department and worked his way up through the ranks of salesman, sales manager, and brand manager.

He has held the position of general manager at a range of motor dealerships for more than 20 years.

Wilson said: “I am looking forward to using my extensive understanding of the motor retail sector to further the success of Bristol Street Motors Hyundai Bristol with both colleagues and customers alike.”