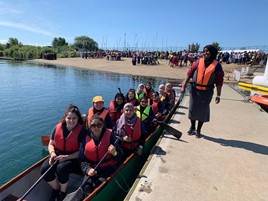 A team of dragon boaters from TrustFord’s Dagenham dealership raised £9,000 for charity this weekend, as they took part in an annual race hosted by the Al-Noor Foundation.

Almost 40 teams participated in the boat race this year, which took place at Fairlop Waters Country Park on June 22. The TrustFord team was proud to finish in 13thplace.

The funds raised by TrustFord will go to iQra International, a UK registered humanitarian charity whose mission is to help restore dignity to the millions of disabled people in developing countries.

The charity raises awareness of the plight of disabled people and provides essential medical support and aid to those who are unable to afford it. The funds raised by the team will go towards building a physiotherapy unit.

The Al-Noor Annual Boat Race was established by the Al-Noor Foundation last year, at Fairlop Waters in the London Borough of Redbridge.

The event is open to all schools, faith groups, charities and corporate organisations and aims to unite the community whereby individuals, families and organisations have the opportunity to raise money for charitable causes which are close to their hearts.

TrustFord’s chairman and chief executive Stuart Foulds said: “At TrustFord being a good corporate citizen is a very natural part of how we do business, and we encourage our sites and colleagues to play an active role in their local communities.

"I’m delighted to see our Dagenham colleagues embody this through their involvement with the Al-Noor Annual Boat Race and support their fundraising for iQra International through the TrustFord Trust.”