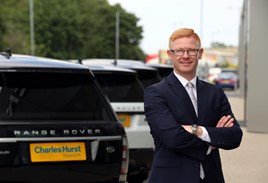 Charles Hurst Group has appointed Alan Thompson as head of business at its £8 million Jaguar and Land Rover base in Belfast.

Thompson leads a team of 50 at the group - part of Lookers - and first joined Charles Hurst in 2005 as franchise manager for Nissan across multiple sites and takes up the head of business role almost a year after the company first opened the 40,000 square foot JLR showroom.

Since then, more than 20 new roles have been created at the site across technical, sales and management areas.

Queen’s University Belfast graduate Thompson, who is from Ballyclare, started his motor industry career in 1986, joining Savills Vauxhall as part of a management fast-track programme before progressing to business manager within 10 years.

In 2005, Alan moved to the role of franchise manager at Charles Hurst Nissan, overseeing the strategic development of the business across sites in Belfast, Newtownabbey and Newtownards and managing a team of over 60 staff.

Thompson said:  "Jaguar Land Rover is an exciting, forward-looking and ambitious brand and I’m excited about the possibilities ahead.

“The investment made to date by Charles Hurst in the site, and in our people, reflects the huge strength of our commitment to these world-class, innovative brands and our pledge to provide the very best for our customers and staff."

The new JLR showroom was the first to be opened in Northern Ireland as a key part of the brand’s £16 million UK-wide retailer initiative announced in 2017 and which features the JLR signature ‘Arch’ concept, housing both brands under one roof.

Part of the Lookers Group, Charles Hurst is the north's largest motor retailer, representing 20 brands across seven sites including its 20-acre Belfast headquarters, the largest automotive park in Europe.