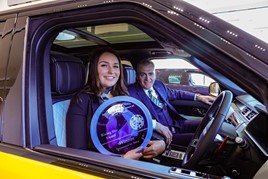 Farnell Land Rover Guiseley sales executive Philippa Haigh has been hailed as a Rising Star with a win at the Barclaycard Everywoman in Retail Awards 2019.

The 23-year-old scooped the national award, which is handed to a woman aged under 30 who is excelling in her retail career and making a valuable contribution to her organisation, at an awards ceremony held at the Hilton Bankside, in Central London, on September 11.

Haigh, who started her career at with Vertu Motors’ Farnell operation on Bradford Road, Guiseley, at the age of 19, said that she was “overwhelmed and shocked to be nominated in the first place”, adding: “To win was more than I could have expected.

“Since joining the company, I have progressed through different roles and a mixture of hard work and support from my head of business has played a big part in my career development.

“I am very proud to be working for a company like Vertu Motors and Farnell Land Rover, which takes the development of its colleagues so seriously.”

Back in July Farnell Land Rover Guiseley revealed that it had successfully expanded its offering to incorporate the Jaguar brand as part of a £4m refurbishment of its showroom facility.

Just a week ago Farnell celebrated the contribution made to its Leeds dealership by its imaginative operations director Jatinder Aujla.

Aujla has exploited his design background to deliver bespoke luxury vehicles to its customers and has now been appointed “SV Specialist Centre” status.

In a statement issued by Farnell Land Rover, the business said that Guiselely Land Rover's "rising star", Haigh, had started work at Guiseley Land Rover at 19 years of age and had been identified as a rising star within the business for her fundamental work in helping the company achieve a higher than average customer service index nationally.

The business hailed her achievements at the age of 23 as “outstanding”, adding that the judges of the the Barclaycard Everywoman in Retail Awards 2019 had admired her "ability to turn down previous jobs that didn’t align with her values and her laser-like focus on what she wants to do.”

Steve Whitaker, head of business at Farnell Land Rover Guiseley, said:  “Philippa is an incredibly talented colleague and she is a worthy recipient of this award.

“We are very proud of her achievements during her short career. Vertu Motors is dedicated to the development of its colleagues and we will continue to support Philippa as her career progresses.”