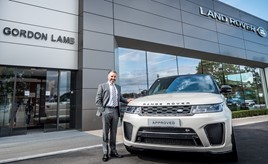 Steele began his working life as a financial consultant before joining Rocar Moores Land Rover in Huddersfield as a sales executive and later became head of business at the Sytner Group in Harrogate and then Leeds.

Now he is preparing to take the reins at Vertu Motors’ Gordon Lamb Land Rover business in Chesterfield, which has recently undergone a £5.4 million refurbishment to bring it in line with Jaguar Land Rover’s (JLR) Arch Concept corporate identity.

Jatinder Aujla, operations director at Farnell Jaguar Land Rover, who began his apprenticeship in the sector at Rocar Moores at the same time as Steele, said: “John is a very high calibre individual and will always leave a positive impression with whoever he meets.

“One of my main criteria for the Chesterfield appointment was that the individual had ‘people’ skills and I am confident that I have achieved that in this appointment.

“John will make a real impression on the retailer and his colleagues and customers can be assured of the exemplary standards of service they have come to expect.”

Steele said: “I am delighted to be joining Gordon Lamb Chesterfield Land Rover and to be working with Jatinder again.

“We have the same values and ethos and I am looking forward to building on the retailer’s reputation in this wonderful new showroom.”

Earlier this year the new Gordon Lamb Land Rover dealership in Chesterfield - which was initially acquired by Vertu in 2016 - was visited by Toby Perkins MP.

The business features a dedicated vehicle handover area, interactive colour and trim display and brand merchandise area are all part of the new customer experience, while updated facilities which include a PDI centre, 14 technician bays, a separate MOT testing area, dedicated 4-wheel alignment facility and SMART repair facility have improved operational efficiencies at the site.