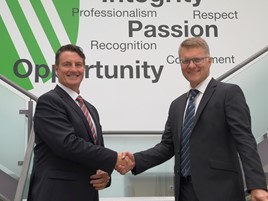 Vertu Motors has appointed the former managing director of Volkswagen Commercial Vehicles in the UK, Simon Elliott, as its new commercial vehicle director.

Elliott, who has also held senior leadership positions as group chief executive officer at Volkswagen Group Ireland and managing director of MAN Truck and Bus in the UK – with further experience working with Toyota in Europe and Daimler in China – will focus on the development of Vertu’s commercial vehicle opportunity.

A statement issued by Vertu today (October 9) revealed that his initial emphasis will be on the Vans Direct business acquired by Vertu Motors in January 2019 and the Group’s Mercedes-Benz commercial vehicle operations.

Elliott, who is an ex-director of Scunthorpe United Football Club who raced a Volkswagen Caddy for three seasons in the televised Volkswagen Cup series, said that he was “delighted” to become part of an “energetic and progressive group”.

He added: “I hope my experience in the commercial vehicle sector can not only be expanded but shared with the rest of the team and I’m looking forward to working with some fantastic industry professionals.”

Robert Forrester, chief executive officer of Vertu Motors plc, said: “Commercial vehicles are a crucial element of our business and Simon brings a wealth of expertise to the role. I am greatly looking forward to working with him.”

The statement said that its acquisitions during H1, 2019, had contributed an additional £0.2m, with the Vans Direct business making a positive contribution despite reduced supply of a number of core van product lines ahead of the introduction of WLTP.

Vertu added, however, that its board believes there is “significant scope to increase the profitability of both these businesses” in future periods.