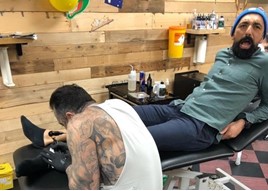 The Australian, who replaced Alison Jones when she left for PSA Group in December 2018, has raised more than £15,000 after VW dealer groups and fellow employees got behind his bid to raise cash to aid the rescue and recovery of wildlife and in the support of the firefighters tackling the country’s bush fires.

A suggestion from tattooed Volkswagen UK colleague and head of network development, Chris Stevens, prompted the idea of Savvas having his first permanent tattoo to raise funds for the cause.

But the original tattoo design – a single, small koala – was soon shelved after the success of the campaign led Savvas to choose a more prominent image…a kangaroo on each ankle.

The tattoos represent the strength of feeling Savvas has for this cause and will serve as permanent reminders of our responsibility towards the environment, the people who have lost their lives in the fires, the devastation of wildlife and habitat in his home country, and the heroic efforts of the volunteer firefighters, Volkswagen UK said.

The message resonated with Volkswagen employees and retailers and within a single day the total was ten times the original £1,000 fund-raising target after several franchised retailer groups pledged four-figure support for the cause, and over 200 other individual donators chipped in with smaller contributions.

Savvas said: “I have chosen to support WWF Australia, helping provide emergency funds to care for our injured wildlife, and when the fires clear, to aid in the restoration of the forest homes our koalas and other animals have lost.

“I am touched by the overwhelming support I have received in raising funds for a cause that it is important to me personally.

“To encourage support I decided to get my first tattoos. I wanted to do something different to ensure that I have a permanent reminder of the impact climate change has on us and to recognise the brave Australians on the frontline volunteering to fight the fires and support their neighbours.”

Funds are still being donated to Savvas' charity drive and donations can be made via virginmoneygiving.com/AndrewGettingInkedForAustralia.

The Volkswagen franchise has experienced a franchisee reshuffle in recent months, with AM reporting before Christmas that 10 VW dealerships changed hands during the last two months of 2019.

The following day Citygate Automotive confirmed its acquisition of Inchcape Retail’s Volkswagen dealerships in West London and Twickenham – six weeks after AM reported on the impending deal.