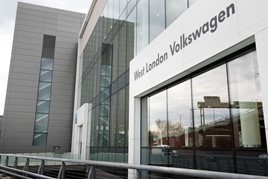 Citygate Automotive has confirmed its acquisition of Inchcape Retail’s Volkswagen dealerships in West London and Twickenham – six weeks after AM reported on the impending deal.

Correspondence sent to Inchcape employees back in early December revealed that that the AM100 group’s Twickenham and flagship West London sites would be sold, subject to contract, to Citygate, suggesting that the Ruislip-based operation “is best placed to drive the future success of those sites”.

Now the deal has been confirmed, with Citygate stating that the two acquired sites were an “obvious addition”, coming in-line with its strategy to maintain a focused brand portfolio and geographic footprint in order to deliver operational efficiency.

The move comes six months after Inchcape’s disposal of five car and van franchises – in Chelmsford, Colchester, Romford and Southend – to Group 1 Automotive.

Citygate said that the Twickenham site will cease trading as a VW retail point, however, undergoing a refit to become a brand-new Seat dealership offering both Seat and Volkswagen servicing.

Group chief executive, Jonathan Smith, said: “We are delighted to have completed this deal, adding two more strong locations to our portfolio and extending our already strong relationship with Volkswagen Group UK, who we would like to thank for their support during these acquisitions.

“We have complete confidence in the potential of these locations and our ability to deliver excellence for the brands and our customers.”

Citygate’s two-site acquisition from Inchcape is the latest in a string of disposals and acquisitions within the Volkswagen UK retail network.

Yesterday (January 16) Vertu Motors confirmed that it had completed the £8.8 million acquisition of four VW dealerships from Sytner Group.

And AM highlighted in this month’s magazine that a total of 10 VW dealerships changed hands during the last two months of 2019, with Sytner cutting its Volkswagen representation by a third with the sale of its Liverpool, Warrington, Stafford and Stoke-On-Trent locations to Johnsons Cars in November, ahead of the closure of its facility in Halifax.

Citygate, which was founded with five locations back in 2006, has now grown to have 13 dealerships located in London, Chalfont, High Wycombe, Watford, Colindale, Ruislip, Bushey, Wooburn Green, Slough and Reading.