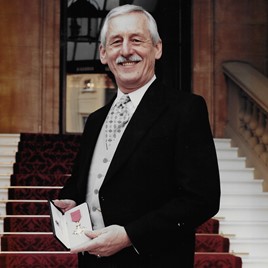 Geoffrey Atkinson OBE, who was chief executive of automotive industry charity Ben from 1978 to 2004, has died after a short illness.

Alongside his time leading the charity, Atkinson, who'd briefly been an actor on stage and screen, was also known in the motor industry for being a co-founder of the Petrol Retailers Association, to challenge the treatment of fuel station tenants by major petrol companies.

At the PRA, which was later integrated into today's Retail Motor Industry Federation, Atkinson organised a mass rally of petrol tankers to storm into London and present a petition to the government. Along with others, his lobbying eventually drove the introduction of government legislation to outlaw restrictive trade practices of the major fuel retailers.

But during his career with Ben he was renowned for being compassionate, caring, listening and above all generous with his time for staff and beneficiaries alike, and each month he would visit Ben's four centres to hear from employees and residents and address any problems that were identified.

He was responsible for starting to provide specialist care for young disabled people from the industry alongside Alzheimer’s care units in two of the four nursing and residential centres.

Together with Ben's director of welfare Atkinson set up the first industry day care centre at Peugeot in Coventry, attracting press coverage throughout Europe.

Ben said his leadership proved to be invaluable when the 1990 recession hit and he persuaded each member of staff to take a 5% pay cut, led by himself, and also to volunteer to give five hours each week in the centres.

"Geoffrey was instrumental in developing and implementing Ben’s first five year plan in 1978, which achieved its ambitious objectives of developing new sheltered housing; building a new nursing and residential complex; building a special unit for people with dementia and achieving an income of £1.5m by 1983," said the charity.

"Geoffrey was responsible for the acquisition and subsequent conversion of Alexandra House in Southport into a care centre in 1979 and the building of Town Thorns Care Centre and sheltered housing provision in the Midlands, which opened in 1981. Additionally, in 1997, he led the charity in opening its Day Care Centre, which provides day care for older people and those living with dementia."

Atkinson was awarded an OBE in 2000 in recognition of his work and time spent making a significant difference to the lives of so many people.

After his retirement in 2004 at the age of 65 he continued to be part of several organisations, including The Fellowship of the Motor Industry, the Motoring Guild of Advertisers and an amateur dramatic group called the Garrison Players - evoking his early career in acting when he'd had roles in The Mousetrap in London and TV shows Emergency Ward 10 and The Army Game.

He maintained his support of Ben, and in 2009 he and his wife Tina Steele, Ben's former fundraising director, did a skydive to raise £16,000 for the charity.

Atkinson had suffered from Alzheimers in recent years, and lately suffered a chest infection from which he didn't recover. His death leaves his wife Tina, children Kate, Tim and Mike, stepdaughter Kirsty and nine grandchildren.

The funeral of Geoffrey Atkinson OBE takes place on February 14. For details contact his wife Tina at tsteele47@aol.com