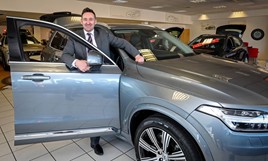 Betts has been employed by the Southampton-based AM100 retail group for the past six year six and is credited with creating, developing and growing the corporate business within the group as well as managing relationships with Motability and 1-Link to enhance its business programmes and opportunities.

Speaking about his new responsibilities within the group, Snows chairman, Stephen Snow, said: “Richard has been instrumental in achieving year-on year consecutive growth in fleet sales along with Motability and 1 Link, as well as supporting Snows to now be recognised as a significant player in the fleet world and winning numerous industry and manufacturer accolades along the way.

“I am delighted that he will now be working with our other Group Directors to achieve even further growth for Snows in the fleet arena.”

Commenting on his new role, Betts said: “I joined Snows after many years in a very large organisation and was drawn by its family inspired values, its trust in its employees and commitment to its customers, which I found to be a breath of fresh air.

“Being part of the company’s huge growth to date is something I am very proud of and I am now looking forward to helping drive its success, particularly in the arenas of commercial, leasing and fleet, even further.”