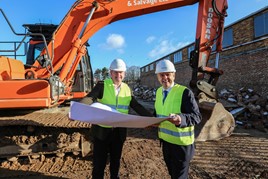 The seven-car facility is due to be completed in November this year and is situated next to Snows’ existing Volvo showroom in Second Avenue, which will remain fully operational throughout the duration of the works.

Snows latest projecty follows a series of investments in its franchise portfolio, including the opening of a revamped Mazda Portsmouth showroom, its seventh Seat franchise, in Basingstoke, a Cupra franchise in Portsmouth and its first London Electric Vehicle Company (LEVC) taxi franchise, in Southampton.

Commenting on the start of progress on the new Volvo Southampton dealership, Mark Austin, franchise manager at Snows Southampton, said: “The team and I are all very excited that construction work has begun on our new showroom.

“The refurbishment is not just about a change of furniture; it has been designed to make our customers feel even more relaxed and at ease in an environment that provides flexible waiting, working and assessment areas.

“The investment in the site also demonstrates Snows’ commitment to the Volvo brand, the city of Southampton and the automotive industry in general.”

Snows’ new Volvo dealership has been designed to adhere to the Volvo Retail Experience (VRE) corporate identity recently at the heart of new dealership openings by Stoneacre Motor Group in Sheffield, ​Ray Chapman Motors in York and Marshall Motor Holdings in Grantham.

As such, it will feature the Swedish premium brand’s signature lounge area and interior glazing to allow aftersales customers to view activity in the facility’s workshop.

The new workshop will feature the very latest equipment, allowing the technicians to offer Volvo customers the highest standards in service and maintenance.

Snows’ technicians will be part of a 12-month training programme which will leave them fully versed on Volvo Personal Service, the aftersales scheme which introduces the concept of two technicians per car in order to provide faster servicing while the customer waits.