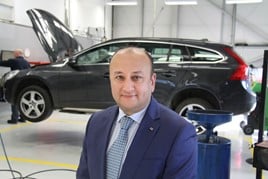 Wallington worked for Marshall as franchise director for seven years after fulfilling roles at Jardine Motor Group and Wayside, before moving to Endeavour in 2018, where he was the subject of a face-to-face group profile with AM.

A statement issued by the group this week said that Wallington’s focus will be to support the management team unlock further growth opportunities and lead a number of strategic projects to support the group.

“Adrian’s knowledge of the sector, many of the groups brand partners and in particular, Marshall will enable him to hit the ground running very quickly,” it said.

Last month Gupta made it clear that Marshall remains poised to acquire businesses as COVID-19 is likely to accelerate consolidation in the UK automotive retail market.

Commenting following the company’s interim results announcement for the six months ended June 20, 2020, he said that the pandemic's impact would accelerate the rationalisation and consolidation of the UK dealer networks, but insisted that the group is “well placed to capitalise on value accretive growth opportunities”.

Commenting on his group's four new appointments this week, Gupta said: “At a time when many in the industry are making redundancies, Marshall is making positive investments for our future.

“These appointments underscore the groups ambitions to its growth strategy and investment in these key roles will enable this to happen.

“All existing roles, reporting lines, responsibilities and accountabilities are unaffected.”

He added: “These high calibre individuals have been added to support the future growth aspirations of the business, support our outstanding management teams and enhance our existing operations.”

Elliott joins from Vertu Motors having previously held roles as managing director of Chrysler Jeep in the UK, president and CEO of Chrysler Jeep China, MD of Volkswagen Commercial Vehicles UK, head of VW Group Ireland and chief executive of MAN Truck and Bus for the UK.

In his new role he will be charged with growing Marshall’s commercial vehicle exposure, footprint and channels to market.

Illing returns to Marshall, where she previously worked for 11 years, from Howes Percival LLP.

Marshall’s statement said that she will add “significant value the group’s growth agenda and the many complexities involved in scaling a business”.

Willmott, the group’s new head of legal, joins from Denton LLP, the Group’s longstanding legal advisors, having acted for the group since 2011 in all its corporate transactional activity, including its IPO in 2015.

In its statement Marshall said that its new appointments would ensure that it kept delivering growth for its investors.

In the same period its portfolio has grown to 132 business units including 117 franchises representing 24 brand partners; and its geographic footprint has increased from six counties in East Anglia to 28 nationally.

Over the same period operating profit has improved by £40m.

The group said that it has remained focused on maintaining its values and culture as demonstrated by its high engagement scores, however.

Marshall’s statement said: “Marshall sees many opportunities ahead and as a result is making these important appointments to its the leadership team.”