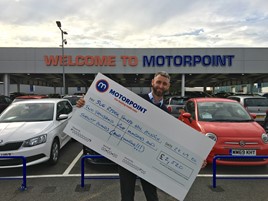 Motorpoint Peterborough’s Chris Northern has raised more than £2,500 for charity after completing the Jurassic Coast Ultra 100K run – despite the official event being cancelled.

He completed the run in 15 hours and 15 minutes, then ran a further 5k and swam a mile.

“I am clearly a glutton for punishment,” said Northern. “I needed to warm down after such a long time running but I clearly got a bit carried away and had to stop myself otherwise I probably would have ended up running the course again.

“I love swimming, and generally being outdoors, so I also went for a long swim in the sea as well. It wasn’t the warmest but it was a great feeling and a great way to unwind after so many months of training. I can’t thank people enough for their generosity. I’ve been absolutely blown away by the donations from people all over the country for the Sue Ryder Thorpe Hall Hospice. It’s been very humbling.”

Northern recently took up running again after a serious motorbike accident forced him to hang up his trainers for a number of years.

The ULTRA 100K route, which takes in Portland Bill, West Bay’s famous cliffs, immortalised in the TV series ‘Broadchurch’, as well as the town of Bridport, was the furthest either Northern or Edis have run to date.

Having completed the challenge, Northern has set his sights on taking part in an Iron Man event, once again in aid of the Sue Ryder Thorpe Hall Hospice, hopefully next year.

He said: “I am already in training and looking forward to putting on my Sue Ryder running top once again and pushing myself even further in order to help those that help others in Peterborough at the Hospice.”

Motorpoint is a long-standing supporter of the Sue Ryder Thorpe Hall Hospice. Staff at the branch, which is based on Edgerly Drain Road in the city, have hosted a number of major fundraising events for the charity, including a Drive In Cinema last year.

Nilesh Patel, senior community fundraiser at Sue Ryder Thorpe Hall Hospice, added: “Everyone at the hospice is in absolute awe of the epic challenge Chris has completed to raise vital funds for local families needing our support. The money Chris has raised could pay for 119 hours of our expert and compassionate palliative care, helping us be there when it matters for people in Peterborough and surrounding communities. We’re looking forward to supporting Chris in his next challenge and want him to know that we are with him every step, swim stroke and spin of the pedal!”