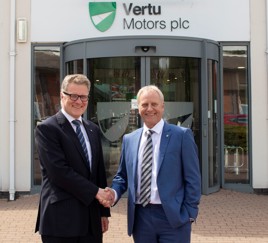 Andy Johnson, group property director at Vertu Motors, has announced his retirement from the AM100 retail group.

Johnson, 66, has worked at Vertu Motors for 12 years, during which time it has grown from 54 to 160 dealerships.

During his career, Johnson has worked in Saudi Arabia managing building contracts and run his own construction company, focusing on Swedish energy efficient timber frame systems.

He first moved into the property side of the motor trade at Sunderland-based Reg Vardy, before joining Vertu Motors in 2010.

Johnson is credited for being “hugely responsible” for the bricks and mortar elements of the Vertu Motors business, including capital expenditure, designs, compliance, maintenance, acquisitions and disposals, and property projects’ due diligence.

His proudest moment within the Group has been his involvement in creating the flagship Macklin Motors Nissan showroom in Glasgow, with its eight-storey high computerised car tower.

Since its opening in 2016, the dealership, just past Townhead on the M8, has become a local landmark.

Johnson will continue his association with the Vertu Motors group as a part-time consultant.

Robert Forrester, chief executive of Vertu Motors, said: “Andy is a first-class manager with exceptional commercial acumen, in addition to extensive property experience and knowledge; I have thoroughly enjoyed working with him over the past 12 years.

“We hope Andy enjoys his increased leisure time, although he will continue to play a part within the business as a consultant.

“I, and all his colleagues throughout the Group, would like to thank Andy for his significant contribution to the success of Vertu Motors plc. We all wish him well for the future.”

During his retirement, Johnson plans to play “a lot more golf” and take regular breaks at his holiday home in La Resina, Spain.

He said: “I will be sad to retire from Vertu Motors as it has been a pleasure working for the company, and for Robert Forrester in particular – his drive and vision has made the Group what it is today.

“I am looking forward to spending time with my family and enjoying regular rounds of golf.

“I am pleased that I am not totally severing my links with Vertu, but still will work on projects for the business.”

Vertu Motors PLC delivered a 41.9% rise in turnover and 228% rise in adjusted pre-tax profits, in a record-breaking set of 2021 annual financial results.

Vehicle sales volumes ahead of market trends, with new car volumes up 7.4% as used car volumes declined 13.2% on a like-for-like basis.