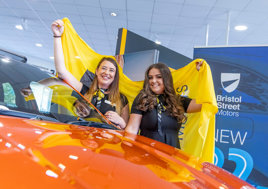 Two former flight attendants who swapped canbin crew duties for a career in car retail are taking to the skies once again in the name of charity.

Sophie Smart and Cora-Lily Sellers, who now work for Bristol Street Motors Bradford Nissan and Renault, plan to tackle a 15,000 feet tandem skydive on August 6 in aid of children’s charity Cash for Kids.

Smart is a sales executive and Sellers a sales advisor at the Bradford dealership, based in the city’s Thornton Road.

They both hope to raise £900 each and have already attracted more than £1,250 in donations between them.

Sellers said: “Cash for Kids provides fantastic support that makes a huge difference to the wellbeing and welfare of children across West and North Yorkshire.

“I hope we can exceed our targets, as every child deserves the chance to have a happy and healthy childhood. Every penny is one step closer to providing that for children in Yorkshire.”

Smart has worked for Bristol Street Motors since September 2020. She was previously employed as cabin crew by Thomas Cook, based at Manchester Airport, before the company folded.

Sellers, who lost her job due to the pandemic, applied for a vacancy at the dealership after buying a car from it and started in her new role in August 2021. Previously, she worked at Jet2 at Leeds Airport.

Smart added: “While I took to the skies during my time as cabin crew, this is a totally different prospect.

“I am somewhat nervous about doing the skydive, but I am determined to do it to raise as much money as possible for a really great cause, which does so much for local children."

Pulse 1’s Cash for Kids supports children living in West Yorkshire, Harrogate, York and the Yorkshire Dales, who are affected by poverty, illness, neglect or have additional needs.

The Bradford dealership already has links with Cash for Kids, having collected festive gifts for its Mission Christmas campaign.

Colleagues intend to visit Hibaldstow Airfield in North Lincolnshire on the day of the skydive to show support of Smart and Sellers.

People who would like to donate can visit Sellers and Smart's donation pages.

Last month, the AM100 PLC, Vertu Motors announced it had begun work to transform its Ford dealership in Hamilton into the second of four new showroom facilities for franchise partner Toyota in Scotland.

Vertu Motors has said that it remains focused on the delivery of operational excellence around cost, conversion and customer experience as car retail’s headwinds deliver uncertain H2 outlook