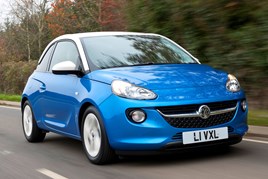 The trend in increasing personalisation of cars means that dealers are finding it more difficult to value and sell a growing number of models, says Glass’s.

Trade bible Glass's points towards cars such as the Vauxhall Adam and Citroen DS3 as examples of models where the ‘wrong’ kind of cosmetic choices can have a dramatic effect on values.

Head of valuations at Glass's Rupert Pontin said: "Factors such as colour have always had a large impact on residual values but the trend towards increasing visual personalisation is magnifying the effect.

"You could have two Vauxhall Adams that are ostensibly the same on paper but, in the metal, are clearly hundreds or thousands of pounds apart in value because of choices that the original buyer made.

"There are some very cosmetically compromised cars around with colour, trim and wheel combinations that looked good to the first owner on the original order form but are not so attractive in the auction hall."

Rupert said that one of the issues surrounding these cars was that the attractiveness of these vehicles was so subjective that it was difficult to know how individual buyers would react.

"The mauve supermini with a tartan roof and yellow wing mirrors running on 13 inch white alloys might look horrendous to a middle aged man like me but great to a 17 year old who has just passed their test.

"The problem is that the trade finds it very difficult to know how to value some of these vehicles so will tend to price them down in order to minimise the financial risk."

A possible solution would be for more dealers to guide new car buyers towards choices that would be more saleable on the used market.

"Part of the fun of these vehicles is being able to specify all kinds of options but sometimes dealer sales people must know when they hit the order button that they are creating a dud.

"They arguably have a duty to point out to the customer that some of the decisions they are making are very likely to have a direct impact on the resale value of their vehicle."