BCA Marketplace vehicle transactions are up year-on-year and its board says the company is performing “well” and “in line” with its expectations in a trading update ahead of its annual meeting yesterday.

The acquisition of SMA Vehicle Remarketing on June 1 is being investigated by the Competition and Markets Authority and BCA Marketplace is responding to its “standard enquiries” and the remarketing company will be integrated “according to the outcome of this process”.

The BCA Marketplace board said the group's adjusted EBITDA for the 12 months ending December 31, 2014 was £82 million.

BCA Marketplace’s year end is being changed from December 31 to March 31.

SMA acquisition: This business offers a multi-channel approach to selling vehicles online and through physical auction sites as well as enhancing its logistics capabilities. This was acquired for an estimated value of £43m (i.e. including repayment of existing debt). This valuation was underpinned by a significant property portfolio of auction sites of almost £20m.

Since then, the Competition and Markets Authority has announced it launched an enquiry into this transaction on competition grounds. The outcome of this enquiry is still to be settled, but we believe its market is broadly-based as there are many ways of selling a car other than via an auction.

We would consider the used car market to be part of this process (annual volumes are >7m alone) with other important markets such as fleet and leasing as illustrated in our initiation note on 5 May. It is difficult to prejudge the outcome of this inquiry, but this business generated £37m of revenue and EBITDA of £4.7m to October 2014 and is therefore not material in the context of the entire group.

“The shares have been broadly stable and continue to trade at a premium to the wider sector. However, we believe this is justified as it is a quality business with unique market positioning, high returns and a robust balance sheet backed with a sector leading dividend yield.

“Our base case DCF (discounted cash flow) assuming fading growth, stable margins and no M&A suggests an equity value in excess of £1.5bn. We therefore continue to believe the risk/reward profile remains firmly on the positive side from here.” – Mike Allen, Zeus Capital, a joint broker to BCA Marketplace. 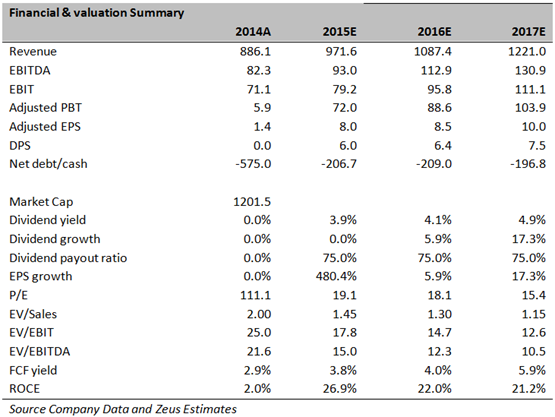