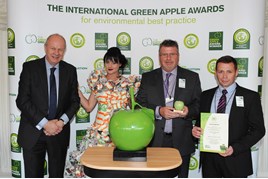 Managing director David Holmes received the trophy from Damian Green MP at a ceremony at the Houses of Parliament on November 16.

The Green Apple Environment Awards were launch in 1994 by The Green Organisation and run annually to recognise, reward and promote environmental best practice around the world.

The Green Apple Environment Awards were launched in 1994  and have become well established as one of the most popular environmental campaigns in the world.

Holmes said: “For a small company like us to win a Green Apple Award is just fantastic.

“With vehicle manufacturers scrambling to reassure the public and even their own dealers that their emissions figures can be trusted, EDT offers a practical solution.”

EDT is looking to grow its business in the UK with more workshops taking on its engine cleaning service in England, Scotland, Wales and Northern Ireland.