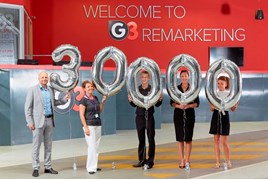 G3 Remarketing has raised £30,000 for The Prince of Wales Hospice following a director's string of sporting feats and donations which accompanied every vehicle sale.

Company director turned marathon man Matt Dale completed a total of five marathons - including London and New York - to help the charity which is based in Pontefract, Yorkshire, which provides specialist, free-of-charge, palliative care for people from the local area, as well as support for their families and carers.

Keen to do even more, G3 then pledged to donate a percentage of profit from every vehicle sold.

A £30,000 fund-raising total was reached earlier this month.

Commenting on his support of the hospice, Dale said: “My father passed away at the hospice six years ago, and it was then that I realised how much it helps the community. It’s not until you need these services, that you understand how valuable they are.

“The Prince of Wales Hospice is a great charity in particular, because the money raised goes straight into maintaining and supporting the facility – not towards marketing budgets and executive’s wages. That’s why we’ll always support them, however we can.”

The hospice costs £2.7m per year to keep open, but only a third of the running costs are covered by the NHS, leaving £1.7m left to be supported by donations and fundraising events.

Laura Bennett, The Prince of Wales Hospice’s fundraising manager, said: “Matt’s dad was a patient with us six years ago, so his and G3’s donations mean a lot – it shows that he’s confident in our services and wants them to be available for other users.

“G3 has put a mechanism in place to ensure their continued support and we’re extremely grateful towards them. It would be fantastic to see other local companies follow their example.”

The hospice was founded in 1989 and helps over 300 in-patients per year, as well as an additional 1,000 people who rece