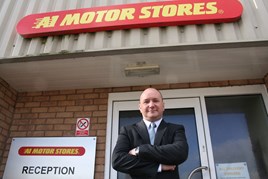 A1 Motor Stores’ head of operations has hailed the recent addition of Motor World Ltd to the motor factor network as a “fantastic addition that shows our intention to build our factor presence in the UK aftermarket”.

Simon Salloway claims that A1 Motors Stores is “going places” following the deal –completed in November – which saw the automotive buying group add 37 Tetrosyl-owned branches to its network after months of talks came to a successful conclusion.

The move almost doubled A1 Motor Stores’ motor factor membership, from 40, and Salloway believes that it sends a message to the UK aftermarket. Salloway said: “This is a big moment for us. A1 is a group going places.”

He added: “We can offer a comfortable home to motor factors, whose owners wish to remain independent but require the security afforded by belonging to one of the UK’s oldest buying groups.”

Writing in his original statement, Salloway revealed that the new additions to A1 Motor Stores’ membership were “ideally placed” around England and Wales.

Speaking this week, he said: “Many stores are in areas where we had no factor presence.

“There may have been a retail outlet nearby, but, crucially, by adding the factor presence, they can complement each other perfectly. The additional 37 sites give the group far greater geographical coverage.”

Salloway said that all A1 Motor Stores’ new members can “expect their sales with the group to grow over the coming months”.

He said: “We (A1) have noticed increasing interest from suppliers over the past six months, in particular, as we continue to recruit members and showcase the many benefits of the organisation.”