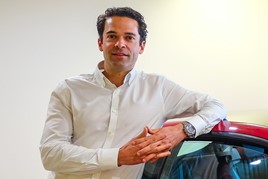 Auto Trader will bypass traditional auction houses in a shake-up of fleet remarketing that will enable leasing companies and larger fleet operators to sell ex-company cars direct to dealers before the vehicle is de-fleeted.

The new and used car digital business is planning to launch the new platform – which it claims will speed up time to sell – later this year, resulting in improved residual values (RVs) for fleet operators.

It also claims the system will be fairer than the current auction set-up where the buyers, typically dealers, pay for the service, not the seller, Auto Trader's business development director Ed Hummel told AM’s sister magazine Fleet News.

Auto Trader believes the market is ripe for a more transparent approach with both parties sharing the fee. This would enable dealers to make more money from the car itself, increasing the appeal of the service to them.

“We expect a large proportion of cars to be sold before the lease expires,” said business development director Ed Hummel.

“Last year, we sold 120,000 vehicles via our trade-to-trade sales platform and 80% were sold within four days.

“Our knowledge of local demand based on consumer search activity combined with our understanding of what dealers are selling quickly, allows us to introduce the right stock to the right dealers at the right time.”

Major remarketing companies, such as BCA and Manheim, already sell a growing proportion of their vehicles via online auction. However, they also have huge legacy networks of physical sites, which Auto Trader believes is not necessary to accommodate the ex-fleet vehicles it is targeting with the new service.

“We have the UK’s biggest captive audience of dealers and consumers, and we have no legacy issue of physical sites so we can charge less,” Hummel said.

Around 13,000 dealers access the Auto Trader website every day. It listed 3.1 million cars to consumers last year, representing 67% of the 4.1 million used cars sold by dealers.

Initially, Auto Trader researched the auction sector by identifying 250,000 ex-lease cars sold via remarketing companies last year, tracking them from collection from the fleet through to when they appeared on its website. On average, it took 34 days.

This broke down to an average of 22 days between the car being collected to being sold at auction, during which time it was refurbished and went through several logistical movements. It took a further 12 days for the dealer to list the car on the Auto Trader website.

“We saw there was an opportunity to do things more efficiently,” said Hummel. “We believe we can at least halve this time by using a proper digital, data-driven process. If we shorten the period, leasing companies will benefit from a better selling price and cash in their bank sooner.”

For fleets and leasing companies wanting to sell vehicles before the lease expires, cars will be inspected a couple of weeks prior to coming off fleet, with high quality images and a condition report. This will be carried out by third parties or via Auto Trader’s in-house team.

Hummel expects the majority of the cars will be sold without any refurbishment.

“Dealers are usually happy to do the refurb themselves and it’s often cheaper, provided any damage is clearly itemised and reflected in the price,” he said. “But if a dealer wants a retail-ready car, we have various partners who can offer this service, along with storage if required.”

Auto Trader can also take care of any logistics requirement after buying MotorTrade Delivery last year. This online business offers logistics companies the opportunity to bid for individual delivery jobs, which reduces the pence per mile delivery cost for the customer. It has 700 logistics companies on the platform and moves around 4,600 vehicles every week.

The new, as-yet unnamed, remarketing proposition is undergoing small-scale pilots with a full launch planned for October. Hummel expects to be listing around 40,000 vehicles per month by the end of the year.

“The response we’ve had from the FN50 and the top five rental companies has been extremely positive,” he said.

The service comes at a time when leasing companies are considering new ways to sell ex-fleet cars direct to dealers or the public.

LeasePlan has announced a ‘clicks and bricks’ service through a new business subsidiary CarNext.com for ex-fleet vehicles and has indicated that it will phase out selling cars through third party auction sites.

CarNext.com is available in three countries but will expand across Europe, including the UK, over the next few years.

Meanwhile, Arval has been selling cars direct to dealers in the UK since 2010 via MotorTrade. It offers around 500 ex-fleet cars on the site.

However, direct remarketing hasn’t always been a success. Lex Autolease abandoned its national remarketing operation, including two used car supermarkets, in 2006 and signed an exclusive deal with BCA.