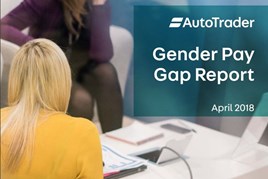 Following the release of its Gender Pay Gap Report, Auto Trader has pledged its commitment to attracting women to higher paid technology roles.

Auto Trader's Pay Gap Report  showed that the mean hourly gender pay gap for Auto Trader was 12.1%, while the median gap was 18.5%, and Auto Trader claims its pay gap was “explained largely by an under representation of women in higher paid technology roles”.

Despite the gap being narrower than the UK high-tech average of 25%, according to Mercer data, the business aims to take further steps towards a “more balanced working environment”.

Auto Trader’s chief executive officer, Trevor Mather, said: “I am personally very dedicated to addressing the diversity balance in our organisation, of which gender is one area.

"The fantastic thing about Auto Trader is that the whole business is passionate about driving change in both the wider technology and automotive sectors, and it is as a collective that we care deeply about doing the right thing.

"Having a truly diverse employee base allows for a more rounded, creative and innovative organisation.

“There is still a lot to be done but together I believe we can make great strides to eradicate inequalities and truly celebrate diversity in all its forms.”

Two years ago, Auto Trader established a Diversity and Inclusion Guild to promote respect and inclusion. It also launched a Leadership Development Programme with a 50/50 split female to male.

As part of its commitment to encouraging greater diversity across the automotive industry, it is working in partnership with Ennis & Co to host an exclusive Diversity and Inclusion event on June 12.

The Diversity and Inclusion Guild’s achievements so far include: