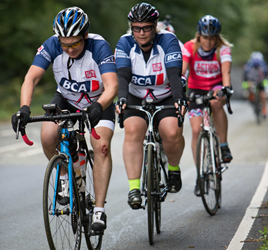 A team of 52 pedal pushing BCA employees are preparing to swap the auction hall for the open road to raise funds for the Action for A-T charity on a 235-mile cycling challenge.

A team from the remarketing specialist raised over £90,000 to help sufferers of Ataxia Telangiectasia – a rare, genetic degenerative childhood disease – last year with a ride from its Blackbushe auction centre to Paris.

Now it is preparing to host a further two events this September.

The main event will see a team of 52 cyclists from BCA and the wider motor industry tackling a 235-mile route from BCA Bedford to the Royal Palace in Amsterdam.

As interest in the event was so high, BCA is staging an additional two-day event for experienced cyclists tackling the challenging ride to the summit of Alpe D’Huez, with an epic 13.8 Km, 21-hairpin climb along the route regularly used for the Tour de France.

Craig Purvey, chief commercial officer at BCA is taking part in both events. He said: “We are delighted that many from across the motor industry are rallying behind the BCA Challenge to raise funds for Action for A-T.

“Cycling from Bedford to Amsterdam will be an epic but achievable challenge for both novice and proficient cyclists and we look forward to raising a substantial sum for this very worthy cause.”

Cyclists taking part in the BCA Cycle Challenge 2018 will leave BCA Bedford on the morning of September 20 before travelling through picturesque Bedfordshire and Essex countryside en-route for Harwich for a ferry trip to the Hook of Holland.

Two days of cycling though the small villages and medieval market towns dotted across the Dutch landscape will see the team arrive in Amsterdam on September 22, with the goal of raising funds and awareness for Action for A-T.

The Alpe D’Huez team ride over the weekend of September 15 and 16, travelling from Lyon to Chamberry before tackling the punishing ascent to the summit of Alpe D’Huez.

Thrifty have also kindly committed to providing support vehicles for the BCA Challenge for the second year running and Rawlins Davy Solicitors are also supporting the event.

Sean Kelly, chief executive at Action for A-T, said: “We are delighted that BCA have chosen to support Action for A-T and the families who look to us for hope for the second year running.

“I would like to thank everyone at BCA, their customers and the sponsors who have collectively worked hard to make these two fundraising events a reality.”

Action for A-T has invested more than £1,700,000 in a variety of A-T related research projects around the world.  A-T affects multiple systems of the human body, and health progressively deteriorates causing an overall loss of coordination and muscle control.

Children are usually confined to a wheelchair by around the age of 10 and will need assistance with everyday tasks.

To make a donation to the BCA 2018 Cycle Challenge, visit justgiving.com/actionforAT