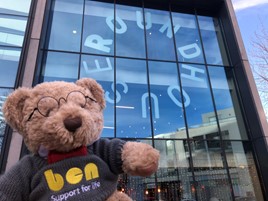 Ben’s Industry Leader Challenge has thrown down the gauntlet to 10 automotive companies including JCT600 and Endeavour Automotive to jointly raise a total of £500,000 for the motor industry charity in 2020.

It comes after £273,260.40 was raised this summer by Darren Guiver, managing director of AM100 dealer Group 1 Automotive UK, Jon Wakefield, who headed Volvo Car UK, and Tim Tozer, UK and Ireland chief executive of Allianz Partners, by pedalling the Thames river on waterbikes in an incredible feat of stamina and endurance.

At the Ben Ball on Wednesday Tozer proudly quipped “we beat Daksh”, referring to the very first Ben Industry Leader Challenge in 2016 when Marshall Motor Holdings chief executive Daksh Gupta did a skydive and raised £151,000.

Gupta responded with congratulations and a light-hearted ribbing via Twitter: “However £275k between three of you is c£90k which is way less than I did on my own. #KeepUp”.

The charity’s chief executive Zara Ross and business development director Matt Wigginton outlined some examples of the work Ben has done this year.

Wigginton warned of suicide being the UK’s biggest killer of men aged under 45, and said in recent months Ben’s staff have been into automotive companies on average every two weeks to support employees affected by a colleague’s death.

Ross explained how Ben’s website and helplines have helped thousands of motor industry people this year, and stated an ambition to make the Ben helpline a 24/7 service, so that it is available at weekends and nights when vulnerable people often need it most.

The Ben Industry Leader Challenge for 2020 is for the 10 participating companies to put forward their senior leader plus an emerging leader to ascend Mount Kilimanjaro, the highest mountain in Africa and the fourth highest in the world.

Ben said at the Ben Ball that there was still a couple of available places for firms which wished to join the businesses already signed up, which include the AM100 car dealer groups JCT600 and Endeavour Automotive, aftermarket firm Euro Car Parts, and publisher and marketer Haymarket Automotive.