Dealers can optimise their demonstrator use through the cloud, says firm 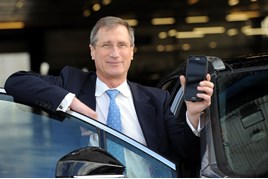 Franchised dealers may be set to benefit from the introduction of a cloud-based booking system by one of the UK’s largest providers of demonstrator vehicles.

The cloud-based technology has been introduced by the provider of demonstrator vehicles to corporates and company car user-choosers and transforms what for motor manufacturers has historically been an administrative regime.

AutoXP has invested “hundreds of thousands of pounds” in XP Fleet Control (XPFC), which has taken two years to develop in partnership with the organisation’s motor manufacturer customers.

Ed Sabisky, chairman and acting chief executive, said: “XPFC is a complete operating system, while our competitors are more focused on a vehicle booking system.”

Sabisky, who spent 22 years with General Motors including being CFO at Vauxhall Motors followed by spells as CFO of Interleasing UK and managing director of Masterlease Europe, continued: “XPFC is best-in-class and adds to the string of USPs that autoXP already delivers to our motor manufacturer customers.”

They also delivered vehicles to support more than 500 client events.

Having transformed demonstrator bookings from a predominantly paper-based system to online, autoXP, which owns the intellectual property of XPFC, is now looking to the future.

He said that could, for example, include delivering new cars to fleet customers and working with franchised dealers to increase the utilisation of their own demonstrator fleets with locally-based SMEs and consumers.