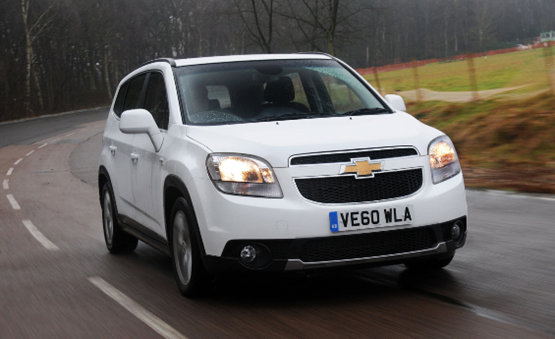 The Chevrolet Orlando heads the list, compiled by Glass’s, and, along with the second-placed Dacia Duster, has been ever-present in its ‘hot five’ for the last few months.

In third place is the rare Mazda5 MPV, while the Peugeot 307CC coupe-cabriolet takes fourth.

Rounding off the list is the Ford Grand C-Max.

Rupert Pontin, Glass's head of valuations, said: "The five covers one of the slowest used car periods of the year, but the results show buyers are still very much in the market if practical family cars are available at the right price.

"The continued presence of models like the Chevy Orlando and Dacia Duster, as well as the Mazda5 and Ford C-Max this month, show that the most in-demand cars continue to be those that present the best value.

“An average price of £10,705 for a 13 month old Duster is an attractive proposition.

"Also, while the summer was short, it did enough to help one convertible - the 307CC - into the hot five.

“While now quite an old car, it again represents an excellent level of value for used car buyers, despite a patchy reliability record."

Pontin’s commentary on the ‘hot five’

> Glass's ‘hot five’ is based on 300 models which have been subject to more than 50 price observations over a four-week period.

The set is then split by range, and an average is determined by the number of days that cars have been advertised on web portals. Published once a month, the countdown provides insight gleaned from GlassNet Radar, Glass's live retail pricing system that provides up-to-the-minute pricing around the country.