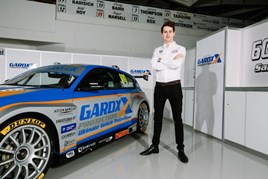 Starting this weekend, the vehicle remarketing group will support Tordoff for a second consecutive season as he looks to build upon a promising first year with the West Surrey Racing team, which carries the name of JCT600, the Tordoff family motor group, and GardX.

The deal will see Aston Barclay’s logo appear on Sam Tordoff’s BMW 125i M Sport and race suit, as he once again partners with fellow BTCC winner, Rob Collard in the series screen live on ITV4 and itv.com.

Tordoff will be aiming to utilise Aston Barclay’s continued backing for another push at the title this season, following a successful 2015 in which the Bradford-born driver registered two wins at Oulton Park and Croft.

A further three podiums at Croft, Thruxton and Silverstone enabled Tordoff to finish ahead of tin-top veterans Collard and Andy Priaulx in a very respectable sixth in the 2015 Drivers’ Championship.

This season’s action gets underway at Brands Hatch this Saturday, April 2, and finishes at this same circuit in early October.

“As the UK’s leading national motorsport series, we recognise the British Touring Car Championship as a series that our customers are truly passionate about.”