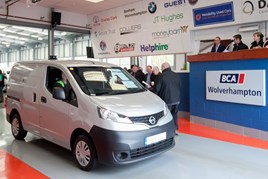 BCA Wolverhampton has celebrated its official re-opening as the re-branding of former SMA centres expands its UK network to 23 locations.

The centre, located on the outskirts of Bilston, has two auction lanes and undercover viewing for 300 vehicles and is managed by Jim Wilson, who formerly managed BCA’s Walsall and Birmingham centres.

The first in a new programme of LCV sales on April 11th was the first sale to be held at the site under its new BCA signage.

“Congratulations to manager Jim Wilson and the team at BCA Wolverhampton for ensuring these opening sale events under the BCA brand have been so successful.”

Official launch events will also take place for BCA in Kinross and Livingston over the coming weeks.