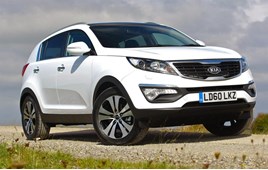 Kia’s Sportage was the fastest-selling used car on Auto Trader during August as it regained the title it claimed for the whole of 2016.

Taking just 17 days to turn, the Korean SUV topped the table in a month which saw diesel-powered vehicles duck out of the top ten for the third time this year and the Renault Zoe mark the second appearance of an EV following that of the BMW i3 in January.

Despite diesel vehicles not making the top ten in national list, it still proved popular across the regions, where diesel-powered engines positioned first in seven of Auto Trader’s 13 regions.

Following hot on the heels of the Sportage was the 2012 Vauxhall Insignia (petrol manual) and the 2016 Ford Kuga (petrol automatic), which took 20 and 21 days to sell, respectively.

“The addition of an all-electric vehicle for the second time ever, coupled with the lack of any diesels in the national top 10, does suggest we’re seeing an important development within the UK used car market.

“With the ongoing negative rhetoric directed towards diesel and the continued sophistication of EV technology, I’m confident we’ll see more of this over the coming months.”

Paul Philpott, president and chief executive of Kia Motors (UK) Limited, said: “Once again it is fantastic news to hear that Sportage is the fastest-selling used car on Auto Trader.

“It doesn’t surprise me too much because Sportage continues to be a great performer, old or new, and we know that motorists love its blend of style, performance, packaging and value.”